A few questions from a new user

First of all a big kudos for this amazing openbox/manjaro distro, it’s so well put together and nicely done,that it makes me want to ditch KDE.

so far I’m using it it in a VM and i got a few questions;

-can i treat this OS like Manjaro in term of adding and removing software?
for example is it fine to remove the current file manager or terminal etc. and chose others?
will this create a whole mess?
for example,will the menus and side panels remove the old and then pick my new software?

-how can i remove the desktops from the top panel,i only need one or two instance.(not 4)

-in VB, it sometimes looses the resolution i set.
where should i fix this?in the Lightdm.conf file(under the “seat” section) or in .config/openbox/autostart

-this is just a report,
i didn’t manage to install it on Vmware.
it went through the install process,but when rebooting it i could see the square with the Mabox logo and then a line saying ’ dev clean etc… 'and that’s it.a black screen.
it did work fine on VB which allowed me to export it to an Ovf file and import it to Vmware.
maybe instead of choosing “other linux 5.x and later kernel” i should have chosen “other /other 64bit” like it’s now after the automatic import of the OVF.

Hello @eman and welcome to the forum

can i treat this OS like Manjaro in term of adding and removing software?

Yes, Mabox use Manjaro repositories with addition of small amount of Mabox own packages https://repo.maboxlinux.org/stable/x86_64/.

is it fine to remove the current file manager or terminal etc. and chose others?
will this create a whole mess?

Rather, I would suggest not to uninstall the default file manager and terminal on your system. If you want to change them, install the ones that suit you. Remember to change the settings of the default programs Main Menu → Mabox Config → Preferred applications.
Then you can still use keyboard shortcuts or panel icons to launch them.
super + f for filemanager
super + t for terminal emulator
See: Default/Preferred Apllications | MaboxLinux

-how can i remove the desktops from the top panel,i only need one or two instance.(not 4)

in VB, it sometimes looses the resolution i set.
where should i fix this?

i really enjoy all the possible customization,added functionalities and choice of software.
I’m impatient to try it on bare metal. 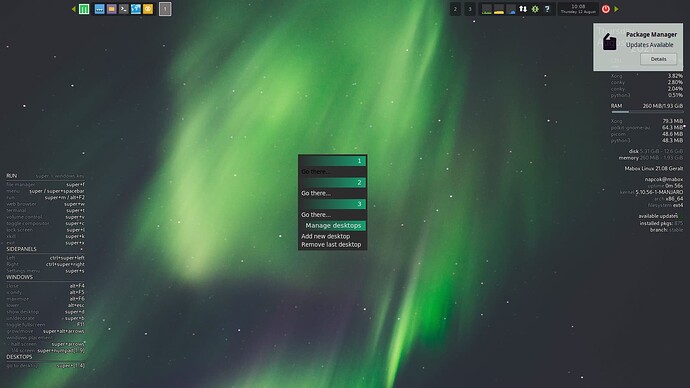 would it be possible to limit the time the volume bar stays visible after i set the volume?(with the mouse scroll wheel),it’s to long for me.
(the bar under the volume icon next to the clock.)

and also change the bar color? it’s hard for me to see grey on white, so i have to hover the mouse pointer over the icon to see the percentage.
(i was using the arch Dark theme).

i manged to install Mabox in Vmware,so i’ll post what i did in case some people are having issues.

i installed it with choosing “other/other64 bit” as the guest operating system.
reboot and black screen.
shutdown and choose “other linux 5.x and later kernel” as guest OS(i also chose uefi instead of bios which is stupid after the install, but i mention this step).
obviously nothing because of uefi.
shutdown and choose Bios again and it worked.

maybe it’s the procedure i did, maybe it needed a few reboots?
idk but now it works.